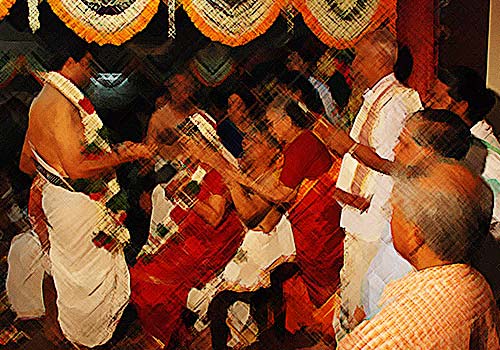 Few weeks back, I attended the marriage of one of my close relatives daughter. Since the marriage was  held on a Sunday, I could spent more time at the wedding hall with all my relatives.

The parents of both the bride and groom were very close family friends. Both the fathers have joined the same government office together on the same day, continue to work there and live in the accommodation provided by the office, in the city. Similarly, both the mothers, though remain as house wives, also became very close due to the closeness of their husbands and due to their living in the same place. Fortunately for the parents, who were looking forward to take their friendship to the next level, the horoscope compatibility of the children, the working environment and their ready acceptance for the marriage, have all worked in their favor, to arrange the family marriage happily.

When I entered the marriage hall with my wife, I came across so many elderly people. There were over 200 of them occupying the front row chairs and watching the marriage from the vantage point. Most of them were in the age group of 65 to 75 and some of them were 80 years and above. Most of them came to attend the marriage with their spouse. I could meet some of my own old relatives, whom I have not seen for several years.

They were all engaged in an enlivened discussion among themselves. Some of them were wearing hearing aids, while, others were using their hands over their ears to grasp all the sound. I could see some of them with missing dentures; some with false dentures and for some, it was all missing. However, what I saw common in all of them was the happiness of meeting their own close relatives and friends after a long time. All of them appeared to have lost several years in their age and showed enthusiasm in meeting every one.

Inquisitive about the presence of so many elders at the marriage, I asked my relative, the girl’s father about it and his reply made me feel all the more happy. He said, ‘we want to take our friendship, closeness and now the becoming of relatives beyond to ourselves to all our relatives and friends. Especially, we were more concerned about the elderly ones and wanted every one of our aged relatives to attend the marriage. We took pain to collect the addresses, distributed the invitation in person and even arranged for monetary and physical support to some of our relatives, who really needed them to attend the marriage. Now, you can see all of them are here to bless the couple, getting to know each other and meeting their own close ones, whom they did not meet for years.

I was able to see more than what he has explained to me. First of all, the parents by arranging the marriage on a Sunday, have helped all the elderly relatives to attend the marriage with their son, daughter or some other close relative. Even those on medications for issues such as BP, Sugar and others were able to make it, because someone accompanied them to the marriage and to help them in taking the medicines regularly.

After the muhurtham, both the parents have requested all the elderly relatives to assemble in a single place and asked the bride and groom to seek their blessings. That was the finest hour for all of them. I could see every one of them close their eyes, pray to their own choice of god and blessed the couple from their heart.

For most of the elderly people, who were not finding a person of their age, to listen to their woes, joys and other gossips, the marriage provided a real occasion to find their peers and vent their mind. In the marriage, they were always able to find someone to listen to their pilgrimage tales or air plane travel and stay in a foreign country with their grand children.

They all could get time to know further about the newly weds in each other’s family, their grand children and more. They heartily blessed the younger ones that sought their blessings. The elderly women, were able to indulge in all gossips to know about the married and unmarried ones in the families, to find a suitable match for their grand son or daughter.

Lastly, I was happy to find that both the parents, having invited a number of elderly relatives, also have made the best of arrangements to make their stay comfortable. The arrangements include food arrangements at the ground floor, special sugarless sweets, easily digestible food varieties, emergency medicines and an on call doctor. It was a wonderful experience for me and a day to remember.

I am looking forward to attend more such marriages.